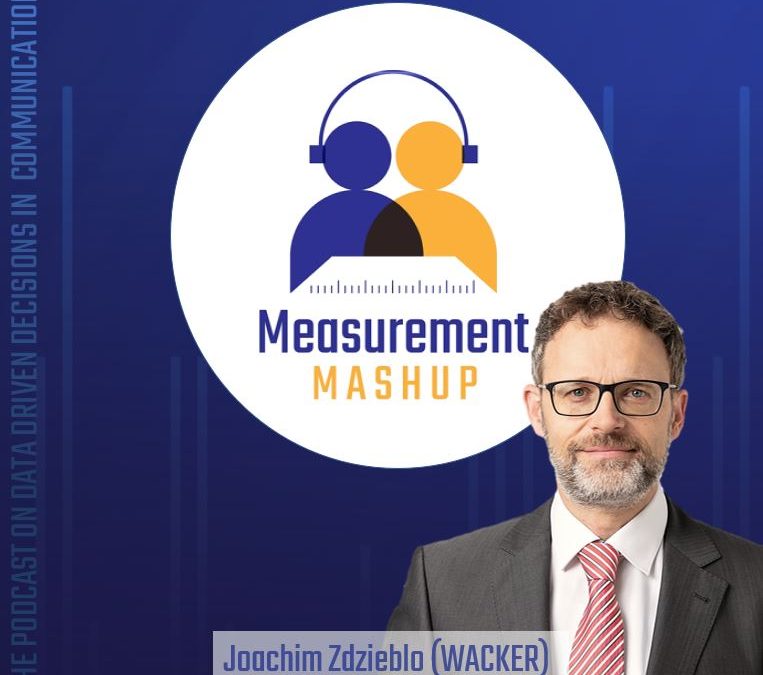 Measuring success in projects can prepare the ground for comprehensive, consistent communication management. Our guest is Joachim Zdzieblo, who turned a project around in the area of corporate social responsibility for the long-established Munich-based company WACKER – with an intuitively started, but ultimately comprehensive communication controlling. 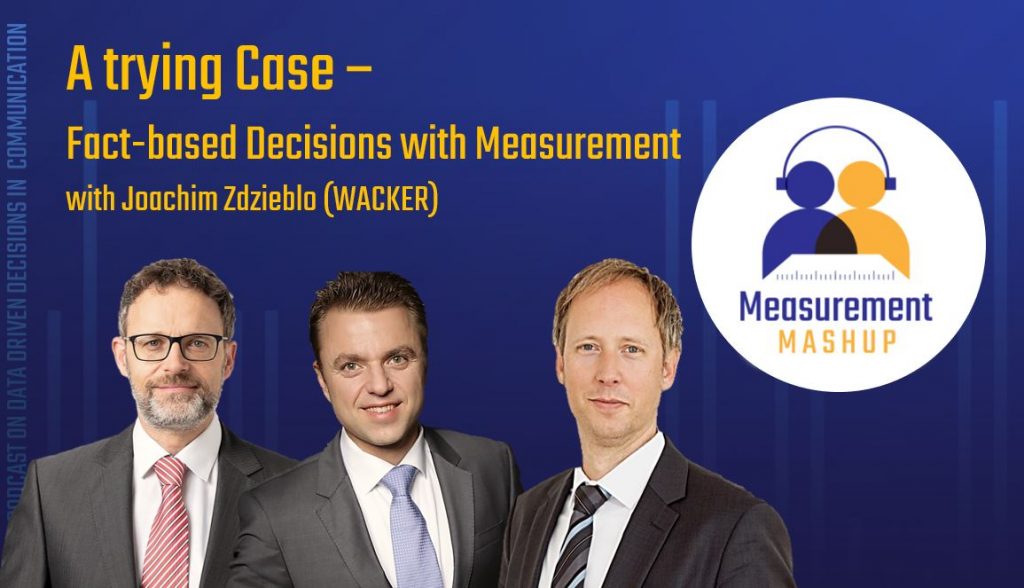 Zdzieblo heads the Public Affairs & Business Service department at Wacker Chemie AG, where he coordinates, among other things, the company’s social commitment. Wacker has been manufacturing chemical products for over 100 years, exports to over 100 countries and is listed on the MDAX. As a graduate human biologist, Zdzieblo is open to everything related to measurement, data and detection. He says that natural scientists make their living by trying things out and then recording the observation and taking measurements. That’s why he is interested in the subject of performance measurement, with it’s testing and the elaboration of findings. He started with a single project module.

A project with little resonance
When Zdzieblo started at WACKER, the company already had a School Experimenting Project: a trial kit with experiments for chemistry lessons, which was made available to teachers free of charge. He wanted to know how the case was used and wrote to 2000 schools asking them to fill out an evaluation form. He returned 60 sheets. In view of this response rate of only 3%, it was clear that the suitcase was obviously not being used enough.
On a closer look, the case contained 35 experimental arrangements and a descriptive brochure of over 100 pages. The teachers should have studied all this in their free time. Zdzieblo’s team reduced the number of experiments to 8 and reworked them so that the students could do the experiments themselves, with more material, worksheets and good graphics.
In addition, the condition for receiving the suitcase was that the teachers had to attend a half-day course, free of charge for them, where they had to carry out the experiments themselves in some kind of  laboratory internship. Only then did they receive the suitcase. This should make it as easy as possible for them to carry out the experiments with the students.

Metrics: knowing what needs to be changed
Chemistry didacticians were also involved in the then named “Chem2do” project, namely professors who are training future teachers. An initial evaluation consisted of testing all the experiments that were included in schools, in chemistry classes, and optimizing them for teaching. Zdzieblo had read an article on strategic communication control and on communication controlling, especially the impact level model of the German Public Relations Society (DPRG) and the International Controller Association (ICV). He wanted to know more, became a member and, based on the impulses from the experts, developed key figures together with a colleague that describe how the suitcase is used. One of them is still the return of evaluation sheets and the consumption of materials. Chemical materials that are in the suitcase can only be reordered against completed evaluation forms. The basic equipment in the suitcase should be sufficient for one hundred students, that means after about three school years a teacher who uses the suitcase regularly has to reorder materials.

Integration into the corporate strategy via targets
Every corporate communications project must pay off for the company and its goals. At WACKER, there are ten so-called strategic demographic targets. Above all, they focus on promoting young talent in the face of an aging workforce. One of the goals is social commitment with regard to the early promotion of interest in science, and this is where the suitcase pays off.
In addition, Zdzieblo follows the hypothesis that people can only get enthusiastic about a scientific career in chemistry if they have already been able to conduct experiments themselves. So a qualitative goal is to get young people to experiment and to support schools in doing so. WACKER is a B2B company, material is only sold to other industrial companies. Schools are therefore not a sales market and do not have to fear any influence from the WACKERchemistry project. The focus is not on branding, but rather on getting students interested in an apprenticeship or study in the field of chemistry. At the moment, the number of people starting their careers at WACKER who have come into contact with the Chem2do case is still very low. However, this key figure is also queried in the human resources department, so it is at the end of the chain of effects.

Who is all this for?
The superiors in corporate communications are primarily interested in whether and how the case is used, whether the project is worth the resources and the money that goes into it.
The team, on the other hand, quickly sees success in the results of the measurements. A visit to an education fair, for example, accompanied by a press release or a voucher in the fair booklet, has an effect on the key figures. If 500 teachers come and you see an increase in course registrations afterwards, it is fun and motivates, says Zdzieblo.
At the moment, however, all key figures are falling – schools were closed, there were block lessons, and chemistry teachers cannot conduct experiments with 30 students. But thanks to his experience with measurements, Zdzieblo doesn’t get nervous because he knows from experience how quickly that can change.
The project has received awards, e.g. the “Schulewirtschaft” Award. Such qualitative markers cannot be expected or planned in the long run. Inquiries for professional articles for journals on the didactics of chemistry or requests to include part of the contents of the teacher’s manual in textbooks are also qualitative markers that show that the project is well received by the target group.

Zdzieblo finds it difficult to estimate the additional effort required for the measurement. First of all, time and energy are needed to consider what is to be measured at all, which markers can confirm the success. The development of the key performance indicator set is part of the ongoing operation and is no longer so time-consuming. Everywhere, budgets for material costs and personnel are under pressure, so it is not unproblematic that resources flow into such a purely philanthropic project. In fact, another, larger project in the field of science teaching at WACKER was terminated because it did not pay enough attention to the goals. In the case of the school trial case, on the other hand, communications controlling was able to demonstrate that it is successful and pays off in terms of corporate values.

In the team together with superiors and various communicators, there is a good atmosphere for discussion in order to make and control fact-based decisions. Communication is being measured in other areas, too. There is a very complex balanced score card system for the company’s trade fair presence, quantitative and qualitative media monitoring and evaluation. The school trial kit, on the other hand, was used to try to build up a measurement and control system across all impact levels in order to show what strategic communication management can look like. And that went down well with the team.

“… it could have been that this suitcase simply cannot be saved. Yes, that’s also a result, then you stop the project early and don’t let it continue for another ten years. That means also negative key figures … are useful for a learning experience –  just say okay, I’ll  put personnel resources, material cost budget into some other project.” Joachim Zdzieblo

Three tips for a good start
– First of all, you need to be clear about your goals: what do I want to achieve? Qualitatively, perhaps also quantitatively.
– Then think about what key figures there could be to confirm success or the achievement of goals. You can also rely on your gut feeling.
– Finally, simply start with a set of key figures that is manageable and on the basis of which the project can be controlled. Sometimes three KPIs are enough, it doesn’t have to be fifteen. In other words: start really small, a lot is simply based on common sense.

The School Trial Kit Project shows how fulfilling it can be if you don’t set your sights too high, but start with a project where you see the direct connection and all the effects. In this way, you can approach the topic of communication controlling, play with it and see what works, and then be inspired to transfer this to other projects. And at some point you can put the big roof on it. By developing a hypothesis, checking it by measurements and facts and describing findings, a well-founded instrument is created that helps you to experience your own success and self-efficacy. By understanding measurement as a kind of game and the KPIs as an occasion for discussion. You can certainly start small.

Joachim Zdzieblo heads the Public Affairs & Business Services department in the Corporate Communications department of Wacker Chemie AG. His responsibilities include the coordination of the MDAX Group’s social commitment, sustainability reporting, stakeholder surveys and reputation analyses, as well as special projects such as the relaunch of the global intranet. Prior to this, the human biologist was responsible for product and health policy communications at the pharmaceutical company GlaxoSmithKline in Germany as press spokesman.