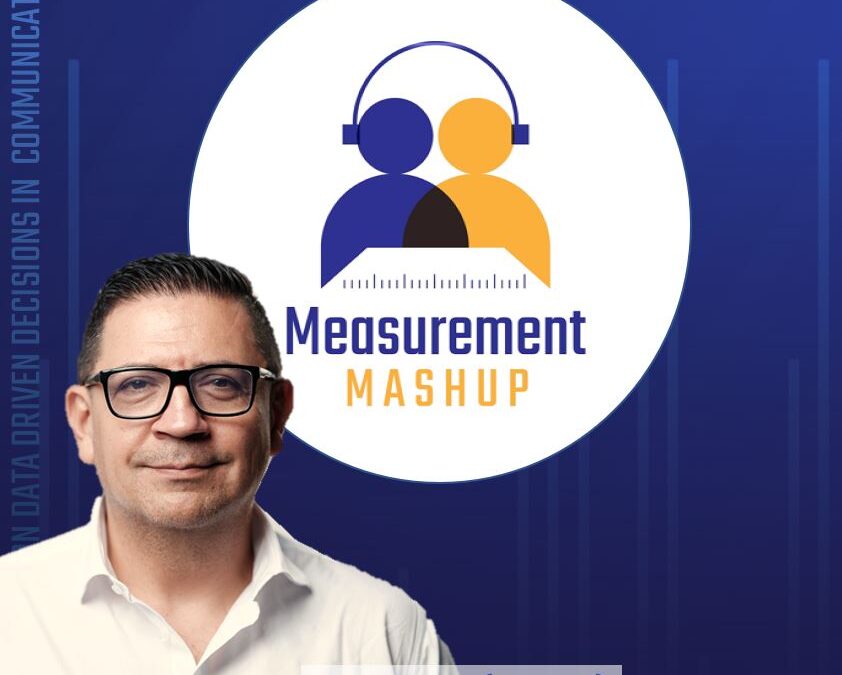 Social media measurement is an important part of corporate communications. It is predestined for evaluations with the help of artificial intelligence, because large amounts of data can be generated, especially for B2C companies. But measuring reach is only one aspect of measuring success. We are interested in whether what companies express also has an effect. Reach data is of only limited help here if, as has now been researched for Twitter, a large proportion of the accounts reached are bots that are not receptive to the company’s messages. We talked to Julio Proano about the value of social media communication and the key indicators that can be used to measure it. 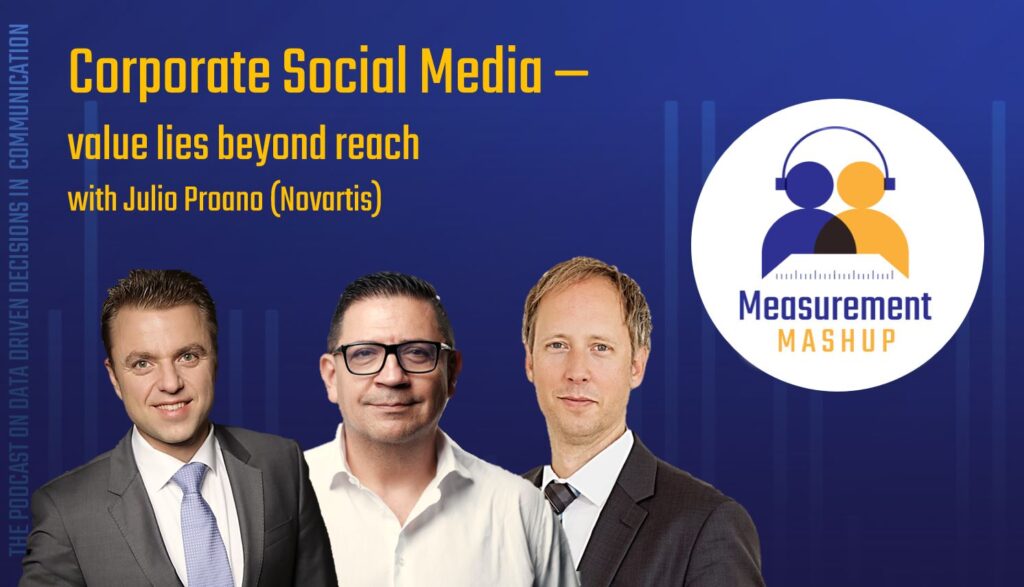 Julio Proano is senior manager for social media channel strategy at the healthcare company Novartis, a company that he worked for since 2009. Before joining Novartis he has worked as a digital marketer and Art Director and in Web design, He has a Bachelor degree in Engineering from the New York University and has worked in the US until 2016, when he moved to Europe, Now he is now located in Basel, Switzerland. Proano is a real data geek, fascinated by data-enabled technological innovations and consequently a big proponent of data-driven decision making.

Favorite tools or: transparency and usability
In social media management, Proano prefers to work with Sprinklr, but when asked, it quickly becomes clear: Excel is still the undisputed favorite when it comes to deeper work on the database, as nothing is hidden behind dashboards or cryptic metrics and data can be tracked and juxtaposed down to the last detail.

Measurement of big data is complicated by the fact that there is no universal standard among platforms. Because each platform addresses its users differently, even metrics such as reach and engagement can be defined differently in the analyses offered there. The best approach, therefore, is to download the information offered, analyze how each platform defines its metrics, and then correlate the platforms. At the latest, when it comes to measuring more abstract metrics, resorting to Excel is a good idea, Proano says.

Social media for pharma companies
Novartis has been on social media for over 10 years. The main reason is that a good 50% of the world’s population was reached with social media in 2020, especially in the global West. In Proano’s field, social media strategy revolves primarily around building and maintaining reputation, depending on the strategic objectives set by management.

Pharmaceutical companies are required by law to monitor „adverse events“ to document whether there are problems with the company’s products (pharmacovigilance). Social media monitoring is a good starting point for this with real-time feedback, market research and brand promotion. The continuous improvement of products, and thus patient safety, achievable with listening on social media is almost priceless as an outcome, Proano says.

The main goal of his organization, he says, is to build trust through reputation management. Proano’s main tool in this is to build and bring together communities. There, he tries to raise awareness about diseases and the scientific knowledge and innovations available about them, primarily through interactions with users. The responsibility of individual companies for global health is another important topic.

Measuring success in this regard is a challenge, Proano says. Traditional PR metrics such as media presence, penetration, reach, share of voice are only interesting when broken down for the respective main target groups. To do that, you first have to understand them precisely. One of Proano’s main target groups are patients who share their experiences on social media and thus make them available to the company. In the best case, interaction on social media in return enables them to better manage their condition. Another group, healthcare providers, are empowered to interact with patients, and they are also provided with the latest scientific knowledge.
Qualitative evaluations such as sentiment analysis are valuable in guiding the community: even negative voices about the products ultimately help improve the products and their safety.
The strategic company goal that stands above it all is reputation, and this should be broken down to KPIs in all aspects – management and leadership, CEO positioning, etc. – and the measurement results made available to all managers, Proano says.

Keeping planning and evaluation on track
As chief strategist, Proano’s main responsibility is to screen campaign designs to see if they fit with corporate values and determine the appropriate KPIs to measure the impact of the action. He also pays attention to compliance and the right tone and helps communicators align their campaign planning accordingly.

Reach at any cost?
According to the traditional view, followers are one of the most important metrics for social media, especially when combined with engagement rates in one’s community. Does it make sense to spend budget there to better target specific audiences with sponsored posts, for example? Can you also achieve your awareness or engagement goals with good content and organically? Proano says the big social media budgets are certainly spent by marketing, not communications departments. For healthcare companies in particular, however, it may be worthwhile to also invest in communications budgets on social media to improve corporate listening, picking up opinions, experiences, and sentiments from the community, and ultimately, products.

New platform, new luck
Integrating a new platform into communications only makes sense if it is built sustainably and tailored to the company’s goals. That requires resources and time. Proano says it’s one thing to consider whether you can envision a new platform meeting the „business need.“ But it’s also important, he says, to consider what message you want to use there to address your target groups. This requires tests with the target groups and listening during the preparation phase. From here, the focus must be placed more on engagement and the constant optimization of content towards the actual goals.

Proano considers the marketing funnel with its phases to be a good tool for the introduction of new platforms. Companies would not spend enough time on phase one, contacting, listening to, understanding and feeding these target groups. Often, that would be left out altogether. Content is simply made available to everyone non-specifically, in the hope that the right people are already there.

Less is more
Proano tells how, under new management at Novartis, content began to be produced in a more targeted way, with higher quality and less quantity. At first, everyone reacted nervously because less was published on the channels and the company was very quiet at times. But the audience continued to grow – and specific audiences, not just general follower numbers. Engagement rates remained at the same level, surpassing those of comparable companies, some of which posted twice as frequently.

Video content for everyone?
All platforms are gradually incorporating video content; no one will get past video, Proano says. And, of course, you have to choose your platforms based on your specific audiences and communication goals, he adds. He remembers spending hours with TikTok himself when it first came up: a platform focused purely on the story format. He noticed in himself the addictive potential of this format. LinkedIn and Twitter, however, have discontinued their story formats – in Proano’s eyes primarily because users of these platforms did not demand this format enough. Video is an important format there, too, but not in the interplay of action and interaction. He himself isn’t putting much effort into Stories at the moment, even though they have their justification on Instagram and Facebook. However, the formats are constantly evolving, and which one he uses depends very much on the current circumstances.

Ownership pays off
When Proano moved to Novartis, the company brought the management of social media channels back from external agencies to its own communications teams. First, in-house staff and structures had to be built up in a major change process. The transition was followed by an optimization phase in which channels and platforms were analyzed. Time-consuming channels were cut back, and more economical channels with good engagement were prioritized. At the time, the team still wondered if Instagram was really necessary, Proano hints. Today, Novartis is one of the most successful pharma groups on Instagram, with about a hundred thousand followers, he says.

Even for social media managers of smaller companies, the social media principles that Julio Proano revealed to us during the conversation can be a good guide:
1. be aware of your goals and target audiences
2. prioritize the social media channels
3. get creative in order to better measure goals
4. choose quality over quantity when it comes to content
5. be sure to personalize content, i.e., put people first

Julio Proano is a technology executive who blends marketing know-how with data and leadership skills to deliver communications success. The leader of social media channel strategy for Novartis’s global corporate accounts, Julio has extensive digital expertise and more than two decades of experience in pharmaceutical, technology and internet businesses. He’s developed strategic roadmaps for emerging communications channels, ensured regulatory compliance in social media, and worked across complex organizations to establish benchmarks for success. Julio has worked for Novartis companies in Basel, Switzerland, and Cambridge, MA. He’s also worked as a digital marketer and art director for Airwide Solutions, a mobile messaging and wireless internet infrastructure company, and as the department chair responsible for building the web design program at Gibbs College of Boston. Julio has a BS in Computer Engineering from NYU. Proano is a native of Ecuador.