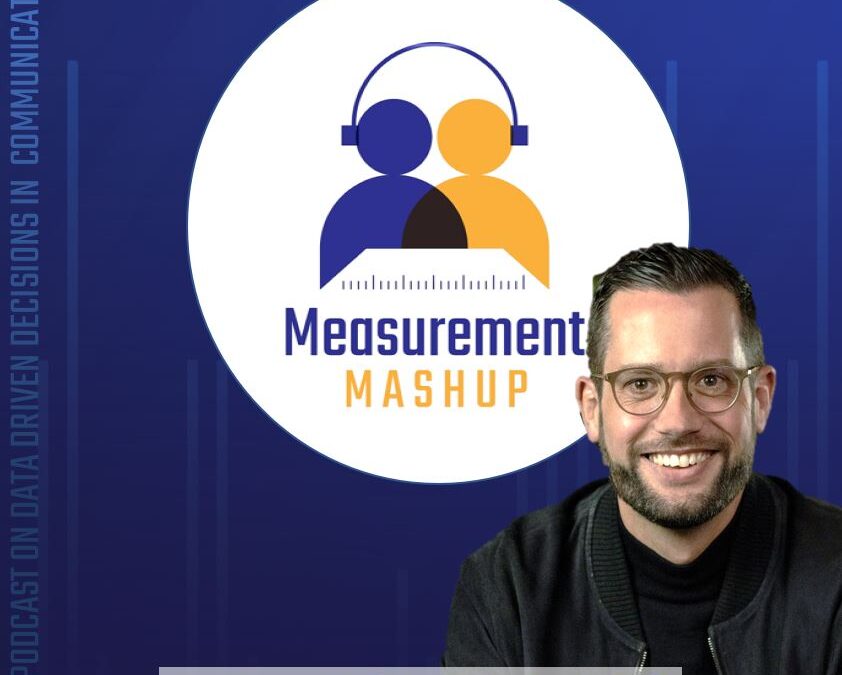 CEO positioning stands for the development of the company’s management into its own personal brand. In the best case, this is closely linked to the corporate themes and gives them a face. Jan Hiesserich has written two books on the subject. We talked to him about how to manage and measure the resulting personal brand within corporate communications. Since we spoke to Jan shortly before the 2021 federal election, this episode not only gives examples from the business world but finds also some in political communications. 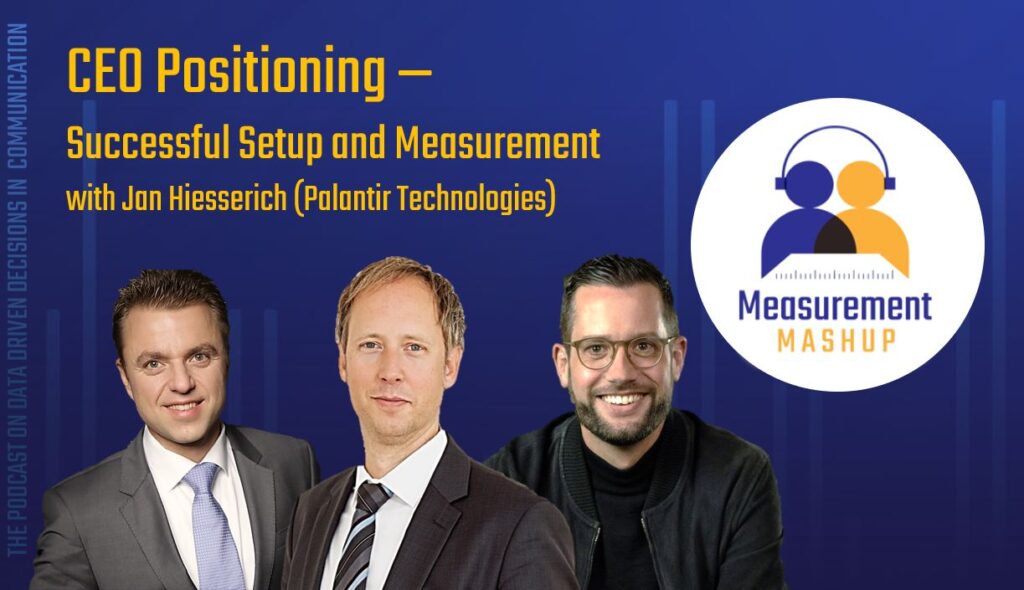 Since the beginning of this year, Hiesserich has been working as a Communication & Strategy Executive at the U.S. data analysis company Palantir Technologies, whose products are paving the way for digital transformation for many companies. Making technology accessible to everyone is a challenge, Hiesserich says. People tend to overload technology with expectations, and that usually goes wrong. Technology is only ever a means to an end, he says, and accounts for only a comparatively small portion of digital transformation.

„For the success of digital transformation, technology accounts for maybe ten, twenty percent. The overwhelming part of the challenge is cultural. And that’s where communication has enormous strategic relevance… For me, technology and communication are two sides of the same coin.“ Jan Hiesserich

Jan Hiesserich originally studied political science at the University of Bonn and then completed a master’s degree in „International Relations“ at Charles University in Prague. He attended an Executive Education Program at the University of Pennsylvania and participated in the High Potential Leadership Program at Harvard. For 15 years he worked as a communications consultant at Finsbury Glover Hering, and from 2020 he was Head of CEO Communications & Strategic Positioning at the software company SAP. His experience has fed into two reference books on CEO positioning, „Der CEO Navigator“ and „Der CEO im Fokus.“

Reputation management as a complex challenge

Hiesserich says he switched from communications to management because it was always important for him to see problems from different perspectives, to look at the same stakeholder group sometimes as a business economist, sometimes as a communicator. Reputation in general, he says, is an incredibly complex topic that fascinated him, especially when the personal component is added to it, as it is with CEO communications.

„After all, the personal component in reputation not only varies from person to person, but also changes over time for CEOs, which is often underestimated.“ Jan Hiesserich

Hiesserich, who holds a pilot’s license in his private life, draws a parallel to flying in the difference between theory and practice: if you know the theory inside out, you are far from being able to fly. And conversely, he says, he has experienced in the past how much time has gone into preparing speech texts, and in the end the entire communication has collapsed because the person who is supposed to convey it is not capable of doing so. Role expectations play an important role with CEOs and pilots: a certain level of competence is expected.

In this example, passengers and employees expect a leader. Someone who will provide clarity, drive change and develop the mindset in the company, and also positions himself externally. The CEO can position himself, for example, as a visionary, a manager, a strategist or a team player. Hiesserich has described these hats or roles in his booksHowever, no CEO would have to be locked into one of these roles, he says. The roles are like a pool from which one can draw, depending on the company, situation, context and personality. The principle is familiar from psychology, especially the systemic view, under the keyword „inner team“ or as the various „hats“ that one wears. It depends on which share is more prominent in a certain situation, in the best interests of the company. The role dimensions presented in Hiesserich’s CEO Navigator are nothing more than typical role expectations that are placed on CEOs from a wide variety of directions, for example, the works council, which prefers to see the CEO as a preservationist. The capital market who prefers the change agent, politics the corporate citizen. Different people and stakeholder groups depend on this, which is why the issue of strategic fit is so important.

The call to be „completely authentic,“ on the other hand, often translates authenticity as being „real“ or simply being the same as always. But you’re not always the same when you’re at home taking care of the kids or sitting in a job interview. Nevertheless, you can always be genuine. When Josef Ackermann showed his victory sign in the courtroom as a defendant in the Mannesmann trial in 2004, he was highly authentic, says Hiesserich, but it was disastrous for the company’s reputation and for his own. He literally fell out of character.

Hiesserich’s books were never meant to be one-fits-all recipes for CEO positioning. His primary concern was to raise awareness of why it is so important to deal with roles. However, many CEOs actually take acting coaches. Good actors would own roles, fill them with personal elements, find a convincing intersection – that’s what CEO positions is also about, he says.

In principle, he says, measurement often evaluates what has already happened and thus not necessarily is oriented towards the future, a phenomenon he calls rearview management. Nevertheless, he said, there are of course indications of whether you are following the path you have strategically set. Context is key, he says; you have to be aware of many determinants in CEO communications.

„Trusting data blindly, that rarely works…we need cross checks. Measurement alone will never be enough and at the end of the day it’s about expectation management.“ Jan Hiesserich

CEOs are most successful, he said, when they develop a good sense of which expectations are placed in them. Developing an awareness of stakeholders and their own roles is important when looking ahead, he said. There are some approaches for measuring in retrospect – some benchmark studies have just been published on the social media performance of Dax CEOs. They look at who is on social media and to what extent, who has the greatest reach on which channel, who addresses which topics, and who achieves the most intensive dialog on social media channels. But all of this tells us nothing about the CEOs‘ roles and fulfillment of the company’s goals.
Hiesserich appreciates that these studies create awareness among C-Level managers for the strategic work of communications departments and thus strengthen the communicators‘ positions. However, he says, they are of little relevance to forward orientation in day-to-day work.

CEOs are often concerned with being cleary distinctive, they look for contrast and try to break with the mainstream. Sometimes, in order to achieve positive effects in the long term, you have to make controversial decisions in the short term. Such long-term decisions might not be implemented if the focus on current measurement data is too strong, and if these data point precisely to headwinds and loss of popularity.

Although the CEO owns the stage, such decisions are not made alone, but must be agreed upon with the top executives and supported by the entire company. The company must have enough confidence in the CEO and the CEO must have enough stamina and persuasion to see it through.

Does every CEO has to be successful on social media, and is Elon Musk, who has now built a fan base like a pop star, a role model? Social media allows you to control your own narrative, and that’s worth a lot, Hiesserich says. Moreover, social media offer completely different creative possibilities, and creativity is one of the best recipes for attracting attention, he says. Herbert Diess of VW is a good example. Success is highly dependend on the person, and if you’re not the social media type, then stay away.

„I think we need to have much more courage to be creative in communication, and social media is of course a great tool for that.“ Jan Hiesserich

CEO positioning and trust in companies

Studies such as the Edelman Trust Barometer show that there is an increase in trust in companies, and trust is strongly linked to personalities.  CEOs flock therefore into social media, based on the corporate positioning and strategy developed with the Executive Board, and try to address their stakeholders directly with the appropriate role staging in each case. This explicitly means not only the shareholders, but all the company’s reference groups. Social media is thus an instrument for gaining trust and for obtaining a license to operate among the important stakeholder groups.
According to Hiesserich, trust is all the more important when people are facing major changes, and although this has not yet reached the collective consciousness, the speed of change is currently increasing exponentially. That’s where managers simply have to get more involved again.

„How often in the past did you hear the phrase, nope, let’s let the facts speak for themselves, as if facts ever spoke for themselves, they’re not appealing on their own. “ Jan Hiesserich

Hiesserich thinks that the concept of elites has suffered so massively in recent years because elites have withdrawn from the discourse and have not contributed, but have always referred to the facts and politics. And politics also suffers from the fact that politicians are so elusive and usually only make vague statements. How are people supposed to trust someone who they don’t even know what he stands for and what he actually is, Hiesserich asks.

In certain cases, politicians are not clearly identifiable in their role. They may succumb to the temptation to combine as many roles as possible in order to appeal to many potential voters. Hiesserich assumes that politicians‘ dependence on polling data has increased considerably. Polling data would determine the election campaign and the debates, and thus a loss of control would occur.

In summary, it is important to have an interplay of

If you creatively align your positioning and role with current events and your communications strategy, you only need to look at the data selectively to see if the path you’re taking is okay.

Jan Hiesserich studied Political Science at the University of Bonn and then did a Master’s degree in „International Relations“ at  Prague University. He completed an executive education program at the University of Pennsylvania and participated in the High Potential Leadership Program at Harvard. He worked as a communications consultant at Finsbury Glover Hering for 15 years, was Head of CEO Communications & Strategic Positioning at the software group SAP from 2020 on, and since the beginning of this year has been Communication & Strategy Executive at the US data analytics company Palantir Technologies.