Episode 9: Hype or „Ready to go“? – Artificial Intelligence in Analysis 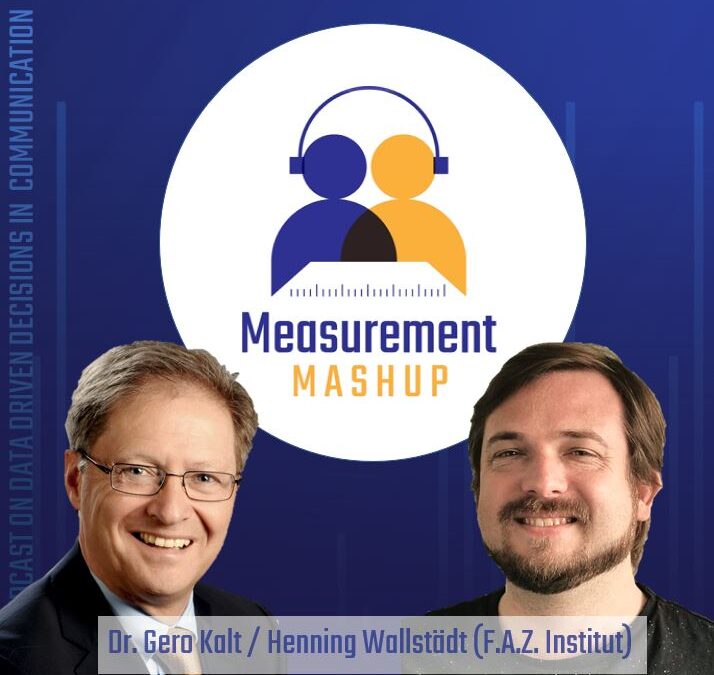 How can artificial intelligence (A.I.) help control communication? Or is A.I. just hype, much ado about nothing? To understand what A.I. can and cannot do today, we invited two guests: Dr. Gero Kalt and Henning Wallstädt of F.A.Z. Institute. 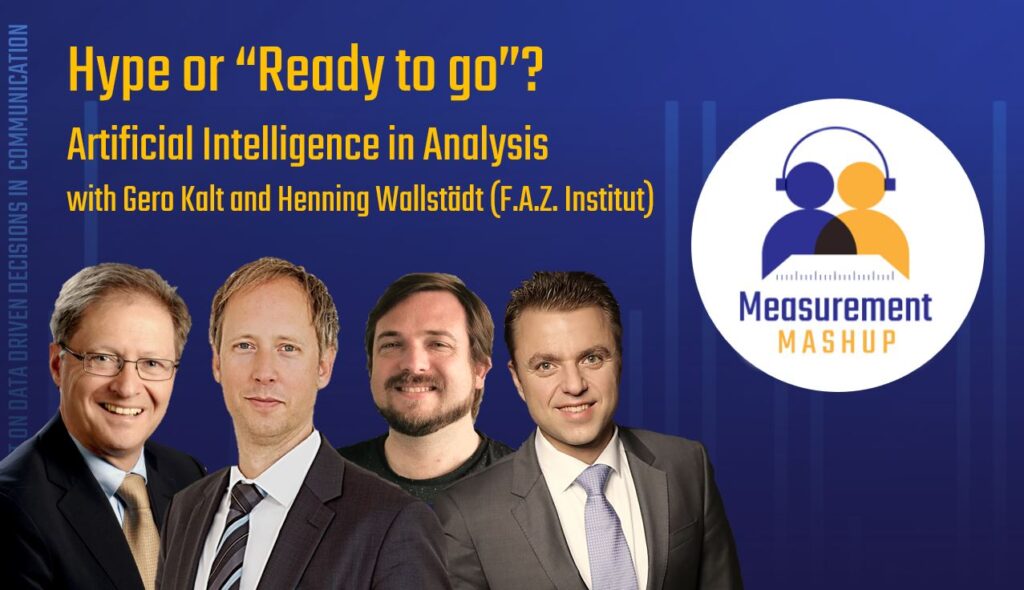 Critics say that A.I. is basically just hype, marketing for the analytics companies. At the moment, no one can really do it anyway, what everyone thinks is artificial intelligence is at most algorithmic intelligence and not A.I., the established instruments – press reviews, social media monitoring tools and media analyses – work just fine…. We discuss what A.I. is really all about.

Gero Kalt thinks that analysis with artificial intelligence is no more a hype than digitization is a hype. He says the world has changed massively in thirty years, especially when it comes to media. In the early nineties, companies in media monitoring had ten or twenty newspapers that were important to them, there were two television stations, and in the region there were three radio stations. That covered the media landscape. In the late eighties, early nineties, the two television stations were joined by a hundred. Hundreds of radio stations were added. Today, millions of people express themselves directly on the Internet via social platforms, via forums, via blogs, via websites. The old methods of cutting and pasting articles would be impossible to keep up with today. Decision-makers have to adapt their monitoring behavior to the world.

„We had a small galaxy to observe in the beginning, and today we have a universe with quite a few galaxies.“ Dr. Gero Kalt

A.I. is the instrument of the times in the age of digitalization, he said. Thirty years of development in the IT industry have brought improvements, he says. Kalt says that through numerous plausibility tests or comparative analyses, it has been possible to determine that the methodology A.I. has become better and better.

The possible applications of artificial intelligence differ from those in classic social media monitoring, i.e., digitized searches using a specific corpus of terms. Basically, the strength of A.I. lies in the fact that it operationalizes questions itself, says Henning Wallstädt. The disadvantage of the analysis with search word chains (queries) is that you only search for what you know you have to search for. Personal prior knowledge limits the results. And both humanly and technically, one quickly reaches one’s limits when entering millions of search word strings.
A.I., he said, is typically a series of algorithms, but they don’t simply return rule- or keyword-based hits; they cluster the data and identify and track patterns. With human expertise, these patterns would be associated with specific topics, such as brand names. This, he said, creates an algorithm that automatically detects where people are talking about something interesting and can work on its own.

„A.I. can only ever work in addition to human expertise; it won’t work on its own.“ Henning Wallstädt

In plausibility checks, the results would have to be regularly compared by users with their own expectations, so that the evaluation criteria determined by the algorithm, so that these patterns can be put into a meaningful context and adjusted. This is how the A.I. is trained. The algorithm is only as good as the data it is given for training purposes and as good as the people who train it and evaluate the whole thing.

How long it takes before the communicator can really work with it and get reliable results depends on the tasks. The standard duration is about four weeks at the most, if you want to train a larger landscape of topics, including the work you have to put in to interpret the individual topics in a human way, says Wallstädt.

Traditional questions that recur over and over again are standardized over time and do not have to be relearned each time. The more exploratively complex the question becomes, the more human intelligence is additionally required, but basically one no longer has to look at thousands of only vaguely relevant results. The machine makes a preselection from which a sample of 50-100 hits is looked at. This is enough to get an idea or estimate the basic quality of the results.

The questions that corporate communications or marketing basically have have not changed significantly, says Kalt. The corporate communicator always wants to know whether people are talking positively or negatively about the company, whether there are individual aspects that are particularly emphasized, whether crisis topics are developing in the vastness of the Internet or topics with which the company can position itself. These are the classic questions that remain: Target group analyses, observation of certain topics, trends, the reputation of the company, CEOs or product. These can be answered and evaluated very quickly and cost-effectively with artificial intelligence.

The most common reasons for not using A.I. are capacity bottlenecks, lack of know-how and the expected costs. But costs are significantly lower with well-trained algorithms than with the old, labor-intensive methods, Kalt said.
Many companies work hybrid because they have concerns about the reliability of the results. They have parallel systems or have human coders recode the results. Do you have to live with tradeoffs, or do the lower costs make up for them?
Kalt says on the subject of precision, in the initial phase, the first weeks and months, human evaluation always has to be switched on in parallel, that is part of the process. Even later, every single statement can always be verified. More important, however, is the relevance of the results. This is often underestimated and is crucial. The results must be so relevant that they trigger action in the company, corporate strategies and measures can be further developed, and companies can be positioned. And for this, speed is also very important. If a finding comes much too late, it is no longer helpful.

Straight to the Actionable Results

A strengths/weaknesses analysis for positioning a vaccine provider, for example, would show exactly in which areas the company is strongly positioned and where there are gaps, i.e., where competitors are stronger, says Kalt. From this, he says, a roadmap for better positioning can basically already be derived.
According to Wallstädt, the K. I. can even issue more concrete action levels by training entire thematic landscapes and creating benchmarks about the companies observed in the context. Then also one could see directly, in which channels which message, which vaccine is most likely represented and where one should become active oneself. The enormous cost factor of the number of observed topics, competitors or channels plays a much smaller role with A. I., he said.

What do you have to reckon with?

If the quantity of analyzed data is only a quality guarantor and no longer a cost issue – what are cost drivers today?
For a basic question like a reputation analysis with six dimensions, which are classically applicable to almost all companies, costs no longer play a major role. When you did this internationally in the past, automotive manufacturers or chemical companies did media analyses for two million euros, says Kalt. Today, you can get that for less than a hundred thousand euros.
However, individualization is a cost factor, i.e., the adaptation of algorithms to very company-specific issues.
A good communicator has to have a good gut feeling, and actually
should not be surprised by the results, says Kalt. But you constantly find interesting aspects through these analyses that you wouldn’t have noticed in the first place. There are wow effects at various levels. Whereas you used to get results a year and a half after you started the analysis, now you get them almost in real time.

The limits of A.I. analysis

The principle of „garbage in garbage out“ applies – without a sufficient quantity of data points in sufficient data quality, there are no valid results, says Wallstädt. And, of course, A.I. cannot replace specialists and experts in the long term. A.I. does not substitute human intelligence, he said; it empowers decision makers to make even more qualified decisions.

„A.I. will not be used as a competitor to the communications manager. He won’t get out of the responsibility. He still has to think along.“ Henning Wallstädt

Perhaps even the demands on the communications manager will increase, because this complexity can be condensed to the essential and relevant with a measuring instrument like A.I.. It is then no longer so important for communications managers to track whether every single one of a hundred million hits has been correctly recorded, once the instrument has been properly set up.
The more specific the question, the better the results?
In A.I.-based analysis, one must always keep an eye open for results that were not on the radar before. While in software-based methods it is often the case that the more concrete the question was, the better the results, in A.I. analyses one should not deprive oneself of the opportunity to also examine the black holes and white spots in the communications universe. Therefore, one should not narrow one’s view too much.

Three tips on how to find an A.I. provider that fits the business

A strong indicator that I have a good partner is that it does not flood me with hit lists based on manually created search term strings. You can see that by the fact that you don’t have to specify yourself which person/topic you want monitored, but that the provider translates the use case for the engine from the mutual conversation.
Furthermore, one should differentiate between social monitoring and social listening. Many A.I. providers are pure social monitoring providers. Actual relevant news only emerges from talking to the customer themselves and understanding their use cases. Central to this is the issue of trust and credibility. It is better to choose a provider that is already established and recommended in one’s own network.
It is also advisable to let the A.I. work retroactively on a question for which one already has results from a traditional method. These test results, from one or even three providers, show relatively quickly how useful the insights are, and can then be easily compared in detail. And you can then send your own internal experts to talk to those of the service provider. Technicians quickly realize whether the other party has a clue.

In any case, A.I. makes media analysis faster, cheaper and shows me potentials and impulses that I would not have seen before.
Of course, A.I. does not take the thinking out of our hands as communicators and communication managers. The more human intelligence I put into the subject, the better the artificial intelligence becomes.

About the Artificial Intelligence Department at the F.A.Z. Institute

Dr. Gero Kalt is managing director of the F.A.Z.-Institut, a subsidiary of the Frankfurter Allgemeine Zeitung. From 2007 to 2014, he was a board member and managing partner of PRIME Research, a company specializing in media analysis that is now part of the U.S./Swedish group Cision. He also publishes the trade magazine „kommunikationsmanager“ and organizes numerous conferences such as the „German Brand Summit“.

Henning Wallstädt holds a degree in mathematics and has many years of experience in the field of machine learning-based speech and text analysis. He has helped shape the path from „traditional“ media analysis to A.I.-supported analysis and evaluation at various analysis companies in business development for Big Data and AI projects.